Well I did it - another ironman-distance event under my belt and pretty much all of my race goals achieved (see http://trihardtraining.blogspot.co.uk/2014/08/race-strategy-for-challenge-vichy.html). 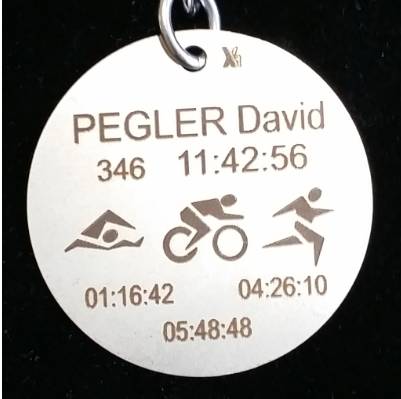 I definitely finished the race with a smile on my face and saved a bit of energy so I could run strongly to the finish line (yes - I did say run!). The time on the clock was 11:42:56 so 40mins quicker than my first attempt at Austria, a new 'Personal Best' and under my 12-hour target. I was able to run the full marathon distance and only walked through the aid stations to take on some nutrition. I would have ideally liked a 4:15 marathon time but I can live with 4:26:10.

The other good news is that post-race my body feels pretty good. Straight after the race I was able to drink and eat (I even had a beer in the athlete's finishers tent and a glass of wine later in the evening). My legs feel good even after a 600 mile drive back to the UK on the Monday. So much so I am thinking of a brief recovery run later in the week. All in all I it was the perfect result and final outcome to my training plan, which began back in Oct/Nov last year.

So what did I do better - I think my long easy runs into the office (six attempts at 25-30km distance) helped and the weather was definitely much more suitable to racing than the high temperatures in Austria in 2012. In addition I took more salt (eating salty nuts) during the race and less sugary gels that previously gave me stomach problems. Finally I quickly got into an easy running pace (small steps) that I felt I could sustain for the full distance. I was constantly reviewing my body and how it was performing and trying to make adjustments to keep me going at the most efficient level. There was a lot more thought about the whole race rather than a single discipline.

Please don't get me wrong it had its 'ups and downs'. It is a long day and plenty of things can go wrong. My biggest mistake was made before the race began. A couple of days before I decided to complete a bit of light gardening and ended up spraining my right wrist, which was not the best start, especially for the swim or for changing gears on the bike. Other small issues - I stupidly put my race number tattoo upside down on my leg (schoolboy error!) - not a major tragedy but a little bit of stress removing it and getting a replacement. The swim was a bit of a battle for the first 500m - lots of thumping and kicking as competitors positioned themselves in the water. I tried to keep out of trouble but still got a few knocks, which must have slowed me down a little. Otherwise, a decent race - the bike route was not as hilly as Austria, however there was a bit of wind to contend with. The run, as previously mentioned, was not quick, however it was a relatively flat route (4 loops) and I was so pleased to keep going.

The low points - between 120-160km on the bike - your body begins to ache and I found it difficult to get onto my aero bars. The run - those 10km loops felt much, much longer - it was tough going!

The high points - a fast first 90km loop on the bike (thought I may even have a crack at 11 hours at one point - forgetting that it gets harder as the race goes on!). The best part was the finish line, seeing my wife and the rest of the Club (five of the guys completed the half-distance and were finished much earlier than me) and saving that final spurt to cross the line - magic!

I have posted the splits for all the guys on our Club website: http://www.horshamamphibians.co.uk/race-results-challenge-vichy-full-and-half-ironman-distance/

Hats-off to Chris who after a decent swim and bike had problems on the run - major cramping that ruined his race time. Although I have total respect that he kept on going to finish his first complete ironman - well done Buddy.

Thanks also to the support from friends and loved ones for again supporting me throughout my training and the event itself. I have some great memories.

Too early too say whether I will do another one or not. Probably not next year as I have already committed to another exciting (and long) challenge - topic for a future blog post.
at September 03, 2014 No comments:

I know, you must be thinking 'E-Bike adventure'.... that's it, he has finally given in to old age, no more 'Tri Hard Dave...