Getting there - slowly and surely

Last week I clocked nearly 11 hours of training including a 4 hour long run. Still not back to my pre - Ironman volume but not bad for base training. Considering I am still not benefiting from my Brighton commute, which accounted for a good proportion of training last year, it is looking OK and I am making steady progress - slowly and surely.

So far in January I have logged 35 hours of training. Last year it was 41 hours in total so it would be nice of I could trump that and end up nearer 45-50 hours.

I managed a decent bike on Tuesday and was pleased with my swimming on Wednesday evening. This morning was a short stride set. One of my mates commented on Strava - training for a sprint finish for my ultra run!

I hope to jump on the turbo later today and/or tomorrow. Saturday is another swim set and possible tempo run. Sunday will be another run but not as long as current efforts.

The plan is to break 45km next week (4-5 hour on my feet) for one single run getting me firmly into ultra territory. Thereafter I aim to get in a 50km  run over the Downs.

It also won't be long before I have my Level 1 coaching weekend in Brighton - I will report back on that later.

Still going through more mid - life 'fun and games' - thinking of progressing to a full motorcycle licence and now growing a bit of an ultra beard (untidy stubble at the moment).

Still coughing but managed 50km on the trails last week

I am still struggling with a dry cough, especially at night time, however last week wasn't a total 'write off'.

There were only a couple of bike turbo sets and one long swim but fortunately 3 decent run sets - 2x intervals / tempo sessions and the all-important long run when I clocked just over 34km. In total I hit the magic 50km, which was my goal for the week.

Over the coming weeks I expect to push my total run distance up, aiming for an additional 10% increase until I hit around 75km (weekly total, not an individual run).

For my next long and easy run I fancy the Downs Link again. This time I aim to first run to Southwater (on country roads, approx. 12km from home) and then will head towards Guildford on the Downs Link (33km from Southwater to Guildford). It is nice and flat, which is not what I will be experiencing during the South Downs 50 mile ultra run, however it would be a good test and the longest run I have ever attempted (before that it would be marathon distance of 42km). I will allow myself 5 hours. If I start around 10am then I can reach Guildford around 3pm giving me an hour or two for a coffee and some food before heading back with my daughter in the car (she is currently working in Guildford) - sounds like a plan!

Thereafter I have plans to run to Brighton over the South Downs but via Devils Dyke to include a good 3-4 climbs, which will be the identical route for my ultra event. A month before the race I am also thinking of entering the Steyning Stinger marathon, again over the South Downs, giving me plenty of practice.

My cycling has taken a bit of back-stage, mostly because of my run focus and lack of commuting to work. Post the ultra run my focus will very quickly shift to the bike as I have Liege-Bastogne-Liege sportive to think of at the end of April.

Hopefully, these events and the training beforehand should provide a good base for the forthcoming triathlon season, which are going to be bias to a number of  shorter-distance Club events and possibly a half-ironman!
at January 19, 2015 No comments:

First week of increased training and I get taking down by Man Flu - serious stuff.

I did soldier on but missed a couple of run sessions and an easy bike. The week was not a complete disaster as I managed three decent enough turbo interval / power sets, 2 swims (despite all my coughing) and a 31 km long run, which was the key session of the week.

The long run was slow (over 6 min per km average) but it did include a couple of nasty hills and lots of mud. I did achieve the distance / time goal, which I increased to 30km and/or 3 hours.

I would normally enjoy a rest day tomorrow but if it is nice weather I cannot resist doing an interval run along Brighton seafront as I will be down on the coast and have missed running there.

Otherwise if I can shake this cold / flu I will try to up the time and run distance. Goal this week is to hit 50km in total.

Will leave you with a picture I took on top of the Downs by Cissbury Ring and 20km in to the run. 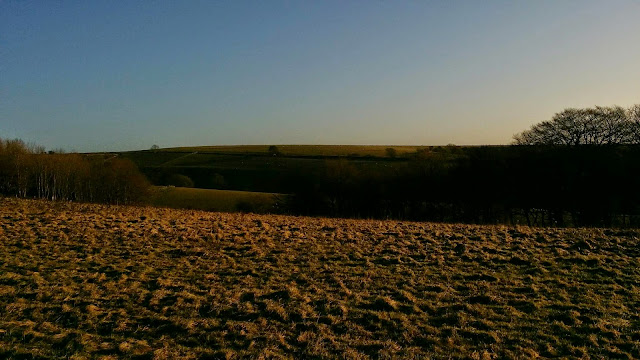 Setting yourself up to win

Still a relatively low volume week but started to set myself up to win. First thing was to get my turbo out in the garage (named the 'cave of pain'). I also utilised an old TV and bought myself a £20 DVD player with SCART lead (old school) so I could easily play Spinervals workouts and favourite movies while I train. Managed 2x 40mins turbo sets during the week.

Was unable to use the pool on New Year's Eve so opted for the Monday evening swim session.

On Saturday went for an hour off - road tempo run rather than a coffee.

My longer Sunday run wasn't that long (family commitments), however I felt pretty good and am confident that I would have had no problem if it had of ended up a 25km plus run (only managed 17km). During the run I experimented with honey and water as fuel - felt pretty good so will use again for longer runs.

So my plan for the coming week:

If all goes as expected a 11 hour total, which is more than I have done for a while. I would like to think I could bank a 25km plus run on the Sunday and increase by at least 2-3 km each week.

I know, you must be thinking 'E-Bike adventure'.... that's it, he has finally given in to old age, no more 'Tri Hard Dave...