Dorking Sportive - a beautiful day for a ride

Managed some more swim tests on Saturday morning, including 14x 100m with 10secs rest between sets. Relatively consistent times between 1:37 and 1:45 recorded.

Saturday evening I was on the dance floor at a friend's 50th Birthday bash - showcasing my moves, which was certainly not the best preparation for a long sportive ride the following day.

After 20mins on the dance floor the recent injuries from the bike crash were playing a bit of havoc with my body and I began questioning whether I was ready for a long bike session.

On the Sunday morning the conditions were perfect for a bike ride in the Surrey Hills so I decided to at least give it a go. The great thing with a Sportive is they are generally informal and there would be no problem cutting the route short during the day and subject to my fitness / injuries.

Although there was certainly a nip on the air it was a great to be out on the bike. My recently replaced front mech worked flawlessly and I was pleased with my choice of winter clothing, including gloves, full-length cycling tights and overshoes.

The route was constantly 'up and down' and as a result quite challenging. One of the toughest hills (18%) had a sign that read - 'Pain is weakness leaving the body'.

After over five hours in the saddle and over 125km in the bank I headed for home with thoughts of the Sunday roast in mind.

All credit to Charlie who stayed on for another hill or two. He was like a whippet up the hills!

A day to recover tomorrow and probably more time on the bike later in the week. I hope to be running again shortly. 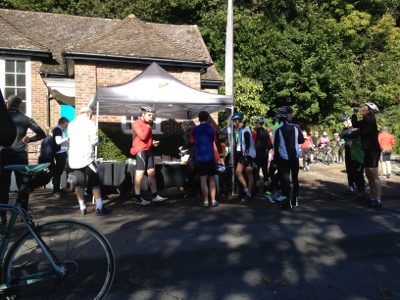